Footswitches can be an incredibly liberating addition to a musical workflow, especially if you need to start or start recording or playback while playing an instrument or using a controller. What if you could make your footswitches do so much more though? That’s a question that the Beat Bars FS3 MIDI footswitch pedal hopes to answer.

The FS3 ships in a postal bag inside of a nice retail carton. This arrived within three days in the UK, sent all the way from Poland via DHL.

Inside the postal bag, Beat Bars was nice enough to include some really lovely smelling candy that features their own branding. I’ve dubbed this candy a “Beat Bar”! 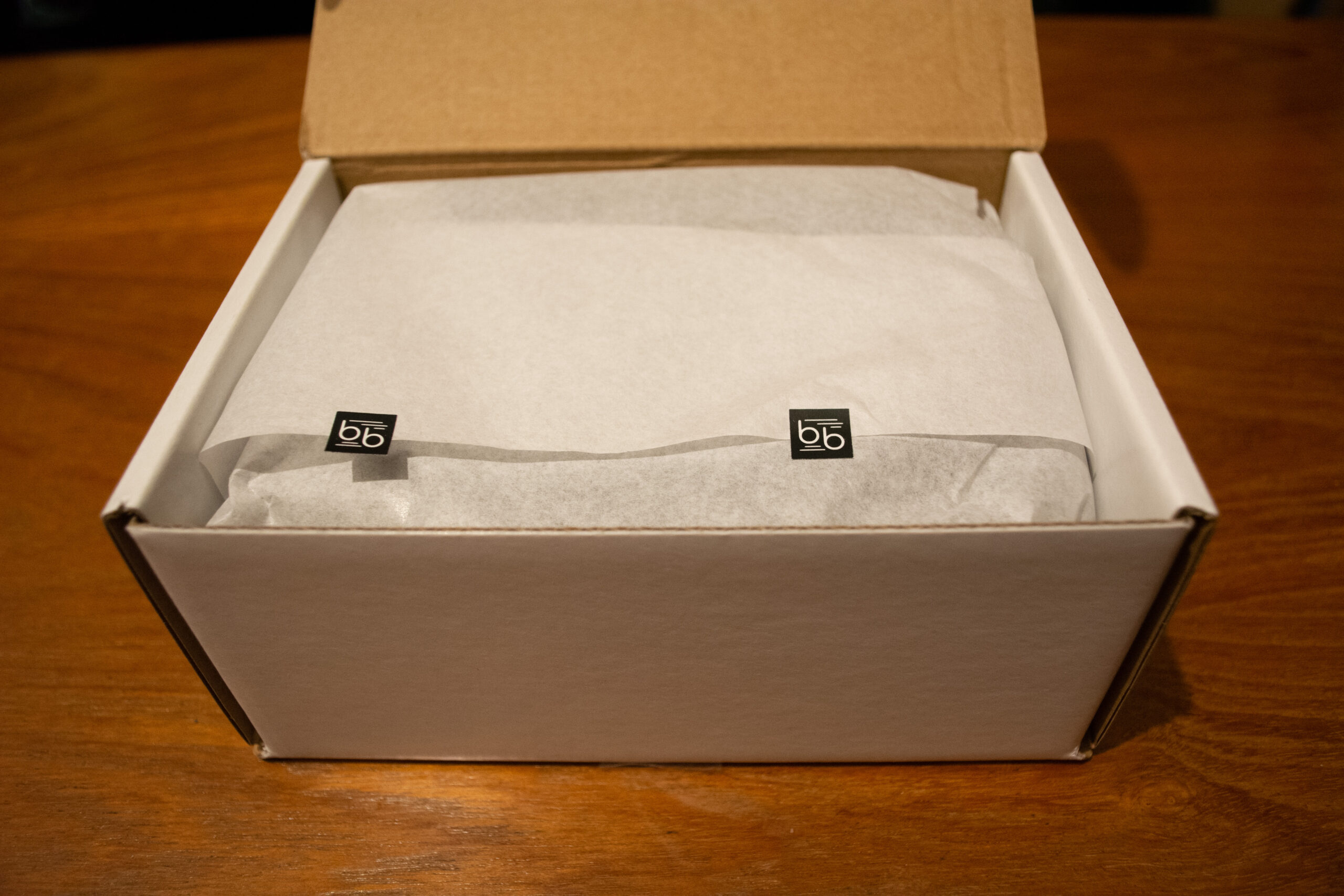 Inside the retail carton, the FS3 is wrapped in delicate tissue paper with stickers holding it shut that feature the Beat Bars branding, again, this attention to detail in the unboxing experience is superb, and really puts their brand front and centre. 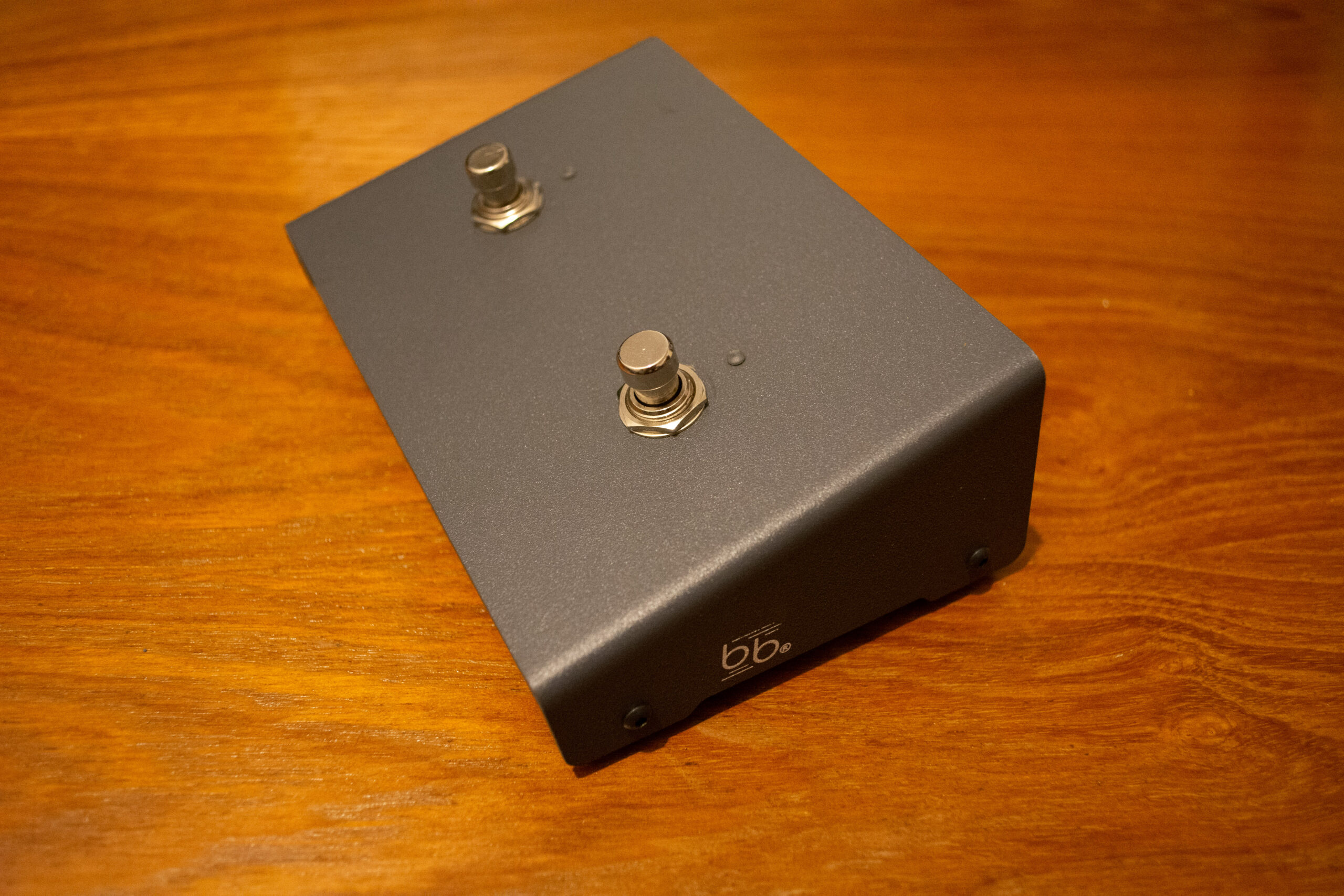 The surface finish of the FS3 is a pleasant slate grey powder coated aluminium. Oddly, the surface finish is different to the EX3, which seems like a missed opportunity for some consistency across the Beat Bars product range.

Comparing the FS3 to the Beat Bars EX3, the first thing I immediately noticed was the difference in weight. The FS3 is actually quite light, but it feels sturdy and durable, owing to its aluminium construction.

A Beat Bars logo adorns the side of the FS3 in an understated matter, which oozes classiness by not plastering it in garish graphics and branding. 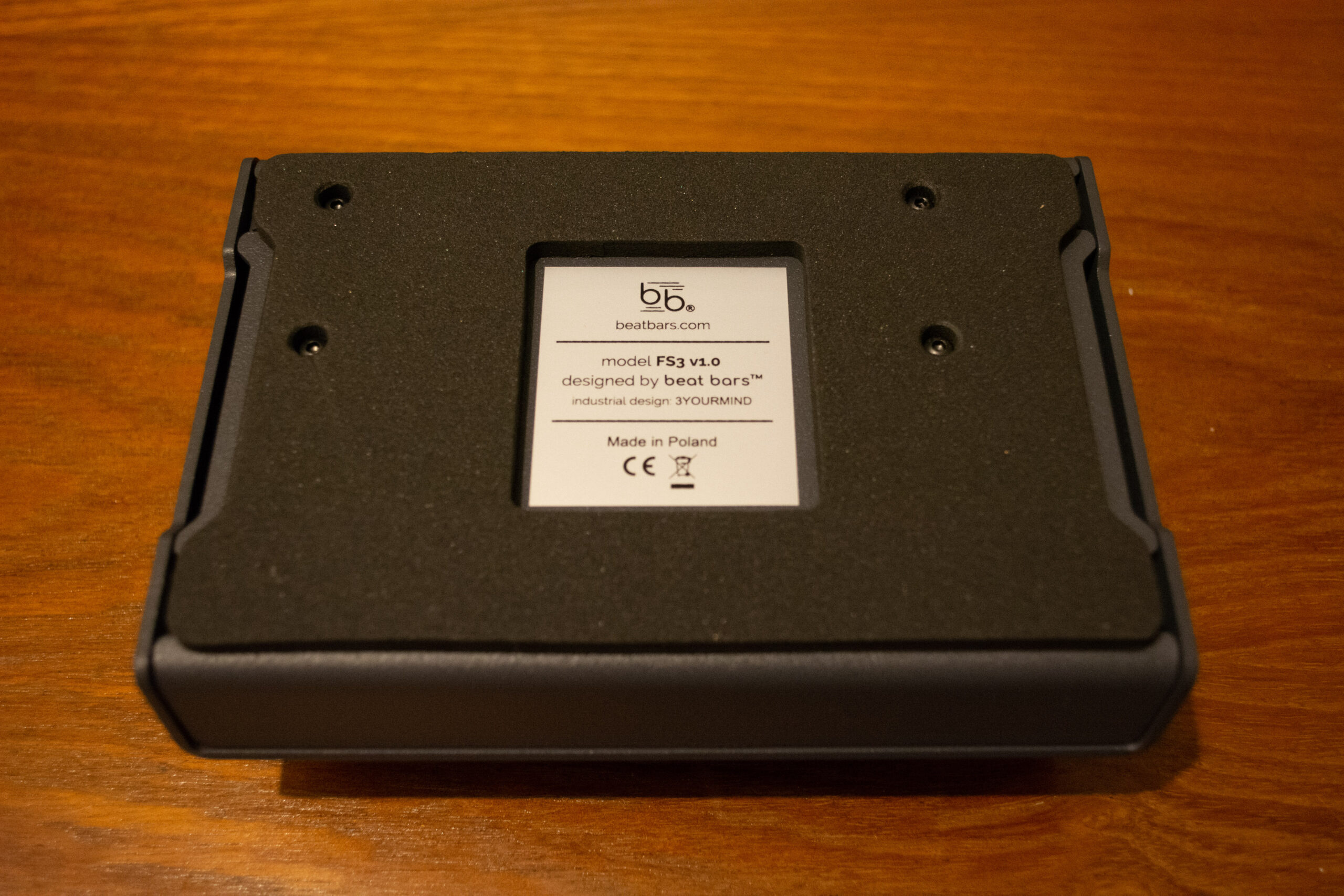 The Beat Bars FS3 is made in Poland, designed by beat bars, with industrial design by 3YOURMIND. 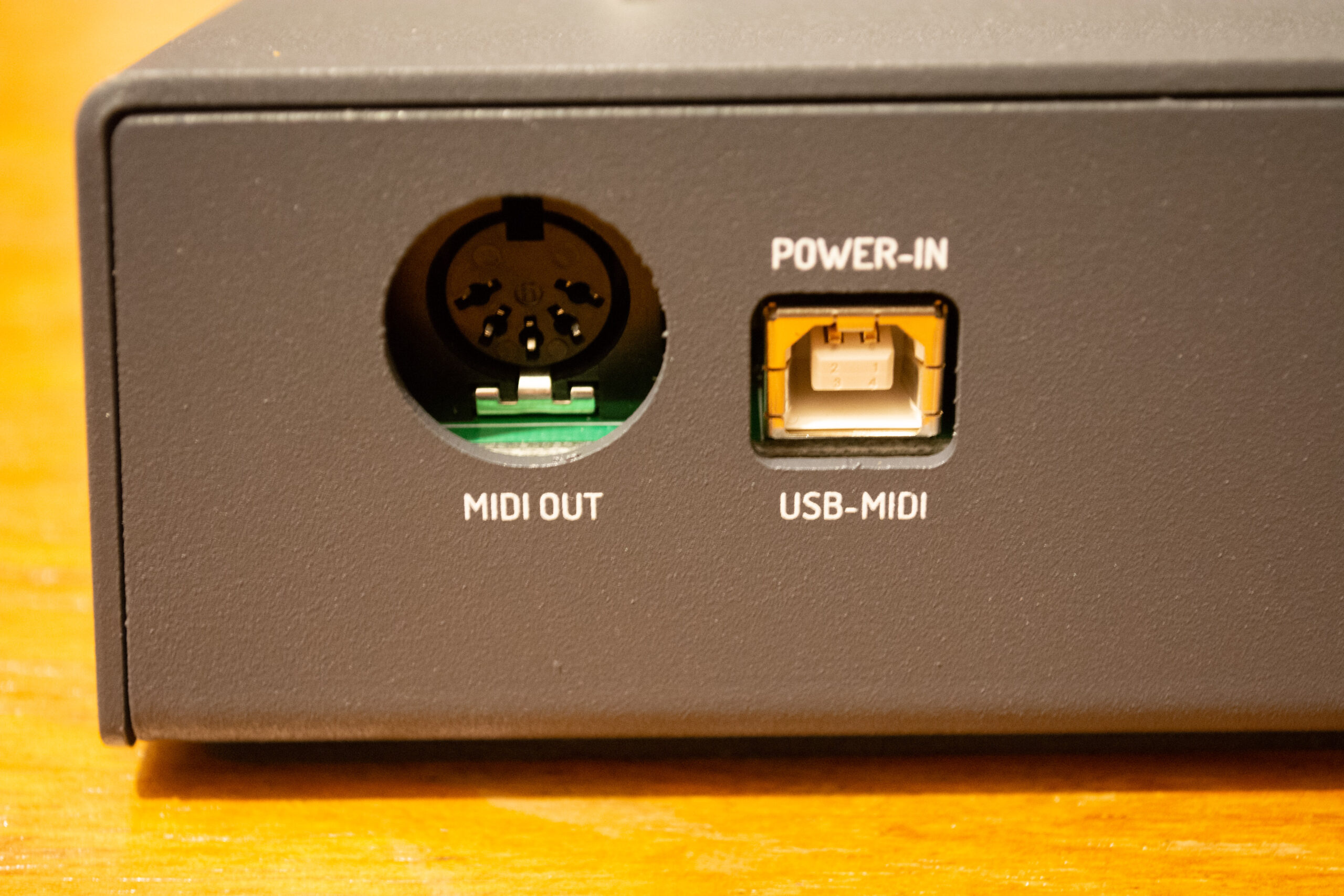 The MIDI port of the FS3 is usually recessed quite a considerable distance from the exterior of the case. MIDI ports are usually flush with the exterior panel on most modern designs. It’s a bit of a dust trap under a desk or on a pedalboard and is something that I would like to see improved on a future hardware iteration. The recessed MIDI port also means that you are unable to use right-angle MIDI connectors.

There is a slide switch on the side for selecting USB or MIDI mode.

Setup of the Beat Bars FS3

The FS3 does not require batteries, which makes it a fantastic alternative to the likes of the BOSS FS-6, which requires batteries, doesn’t have a power supply option, and has the batteries constantly draining for as long as it’s connected via 1/4” to your rig; yuck! I heavily use footswitches with my studio and live rig, they were primarily for play/stop, record, but the FS3 has opened a whole world of possibilities. Beat Bars even include a 3m long USB A-to-B male cable in the box so you can start using your FS3 immediately.

The easiest way to get reliable footswitches in your audio workflow is using a controller like a Native Instruments Komplete Kontrol S-Series that has a footswitch socket, which is of course is expensive, and bulky if you just simply want high quality footswitches on your guitar rig for live use for example. With the Beat Bars FS3, you don’t need a footswitch socket, you can simply connect using MIDI or USB, making life much easier for integrating into your existing workflow.

The Beat Bars FS3 is much more than just two footswitches. A lot of the functionality possible with the Beat Bars FS3 isn’t accessible through the hardware. Like the FS3’s sibling, the EX3, the FS3 has a software utility available for 64-bit Windows 8 and 10, macOS 10.11 (El Capitan) and up, macOS 10.15 (Catalina) and up, and very interestingly, a Linux-compatible 64-bit Java archive. That Linux support is very much appreciated, especially with Cockos Reaper being available on Linux.

One gripe I do have with the beat bars controller config software is that when searching for it on Windows, it is simply called ‘config’ and lives in a folder called ‘beatbars’ in the Start menu, meaning that if you were to press the Windows key and type in ‘beatbars’ to find the app to launch it, you won’t find it. Thus, I’ve been misled to reinstall it on several occasions thinking that it’s somehow become uninstalled. This is something that I would like to see Beat Bars put right in a future update. 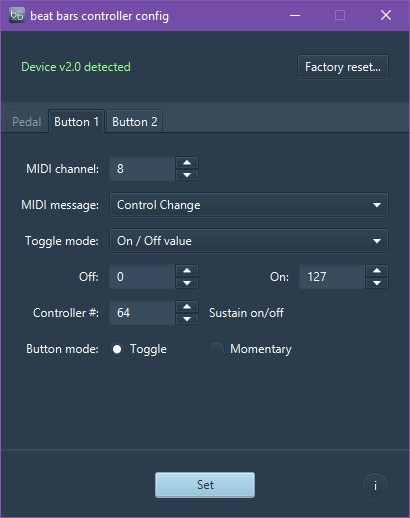 A further gripe that I have with the beat bars controller config software is that in order to configure a Beat Bars pedal of any description, you must only have one connected via USB at a time, which can be irritating to unplug one of them just to reconfigure them, and yes, that means if you want to reconfigure your FS3 then you need to unplug the EX3. This is something I would like to see rectified in a software update or in a future hardware revision as it feels incredibly archaic versus the likes of Native Instruments Controller Editor allowing you to modify any of their connected controllers without unplugging anything.

What I do really like is that you can configure the FS3 via the beat bars controller config utility, and even if you then swap from USB mode to MIDI mode, you can continue to use it with the same configuration, which is great for injecting possibilities into a DAWless workflow where control might otherwise prove to be challenging.

The beat bars controller config software doesn’t get updated very often, and whilst it does what it says on the website description, I can’t help but feel like it is a missed opportunity to provide an improved experience.

With both USB-MIDI and DIN at your disposal, there’s really not much of a limit to what you’ll be able to do with the FS3 and your DAW, or even your DAWless workflow.

One of my favourite usage scenarios for the FS3 in USB mode is inserting markers on the timeline without interrupting playback during a spotting session.

I have created several Reascripts for my workflow, which through contextual awareness of what I’m doing at any moment within Reaper, the footswitches on the FS3 will perform different functions.

I really like the slide switch on the FS3 for swapping between MIDI and USB, I figured it would be a set-and-forget kind of function, but it offers a secondary workflow with just a slide of a switch.

I was surprised by how flexible a workflow using the FS3 with the Westlicht PER|FORMER provided, especially as the PER|FORMER allows you to define what each MIDI input does, making on-the-fly reconfiguration possible without needing to swap modes and use the beat bars controller config software. 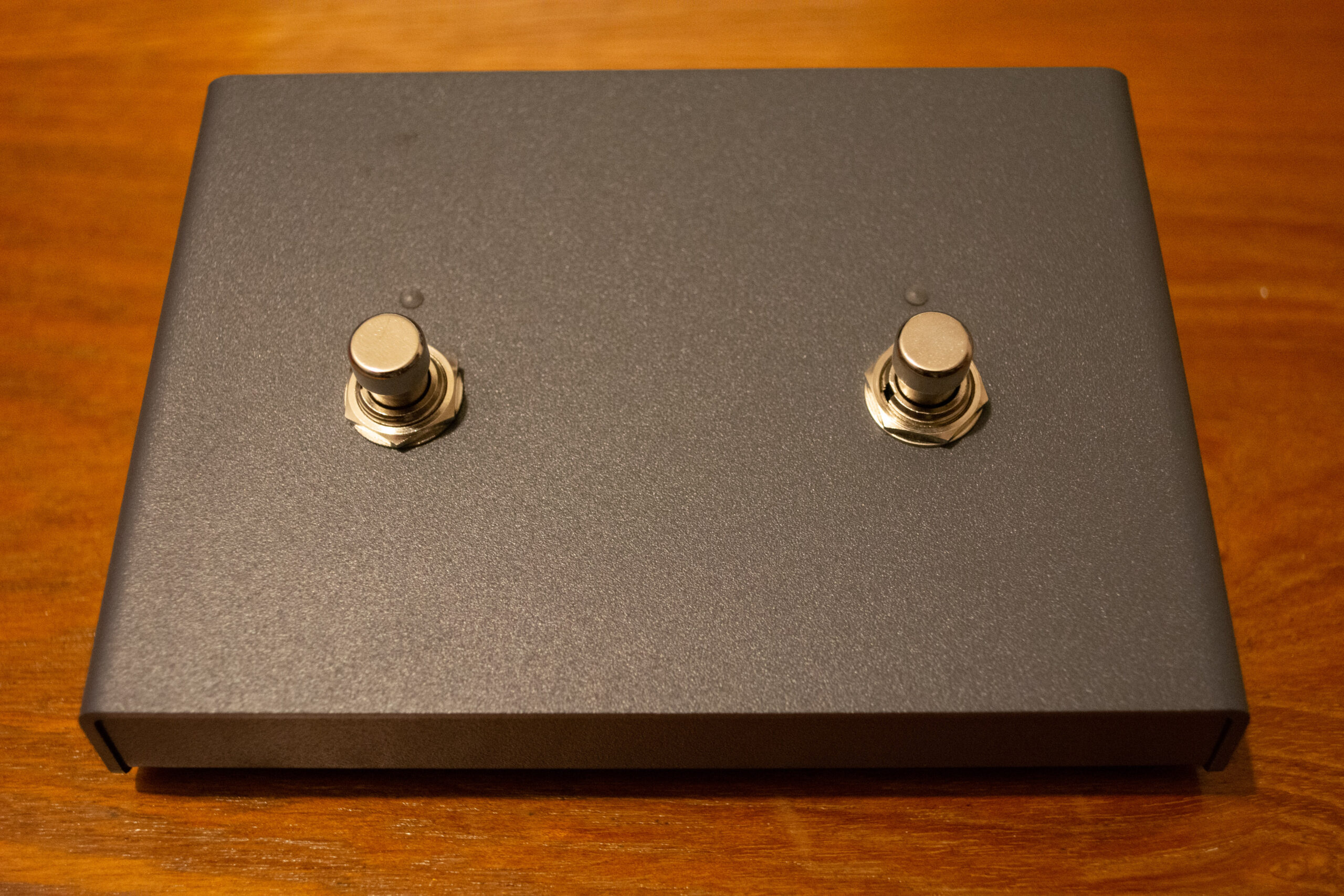 An invaluable time-saver, and one that can really give you an extra pair of feet hands whilst working in the studio.

The Beat Bars FS3 is €129.90 with free shipping within the EU. I personally feel the pricing is spot on with the FS3, in contrast to the Beat Bars EX3 MIDI expression pedal. The FS3 is largely a far better thought out design than the EX3, but is admittedly a far more mechanically simple product. The FS3 presents very good value.

I would like to see a model that features three footswitches in the future, they are very useful, and two isn’t quite enough (you’ll find so many uses!) unless you use contextual awareness via something like Reascripts. €150 for a three-footswitch model sounds good to me.

Beat Bars also sells the FS2M, which is a footswitch to MIDI adapter, allowing you to use any ¼” footswitch and still get the added benefit of MIDI like the FS3, but unlike the Beat Bars EX2M compared to the Beat Bars EX3, the FS2M does not represent particularly great value when you consider that you only get a single footswitch input, and you still have to provide a footswitch of some description. It may make sense if you already have a high-quality footswitch that you already enjoy using.

The FS3 is a must-have, regardless of whether you already have footswitches, you can really never have enough, especially when they are this versatile. The configuration possibilities for the FS3 are what makes it so appealing. I would like to see deeper possibilities with the beat bars controller config in the future like running macros elsewhere on your computer, like with a Stream Deck, allowing for configuration of the footswitches per-application. MIDI within an audio workflow is great and all, but with the FS3 always under my desk, I can’t help but want to use it in programs outside of my audio workflow, like setting a footswitch for push-to-talk.

There’s definitely room for improvement, but that shouldn’t stop you from picking up an FS3 and thoroughly enjoying it. 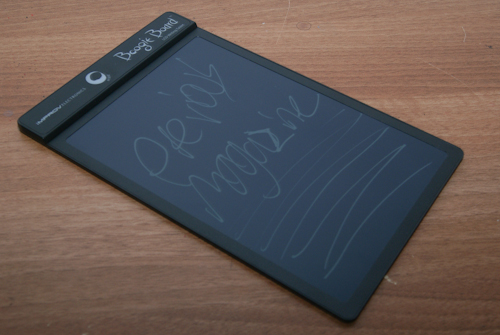 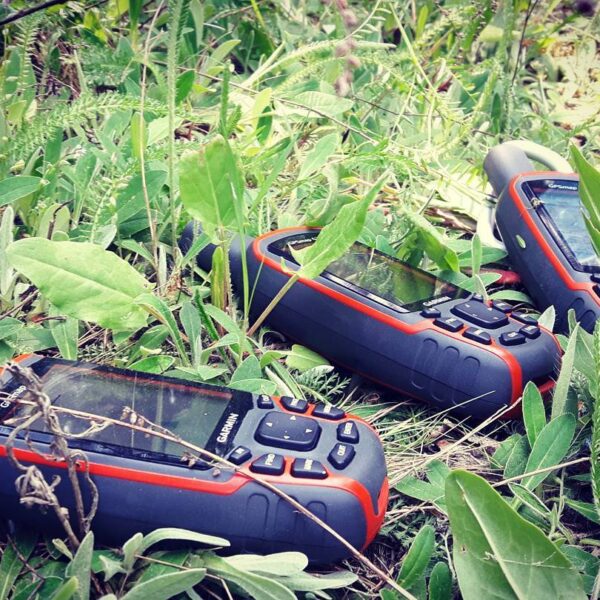 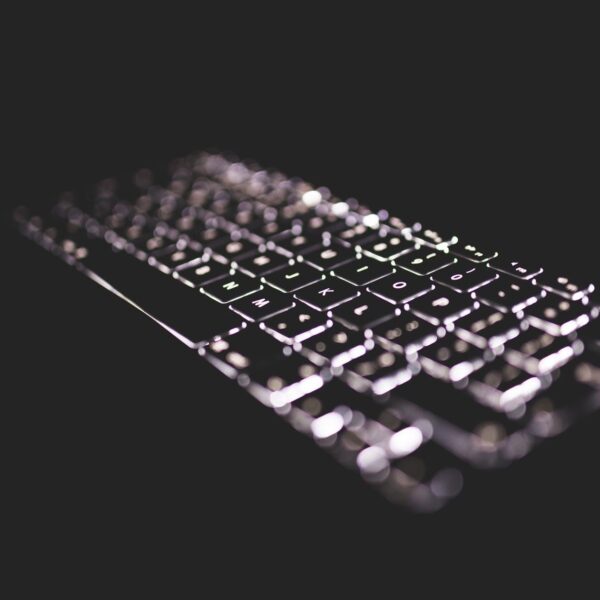 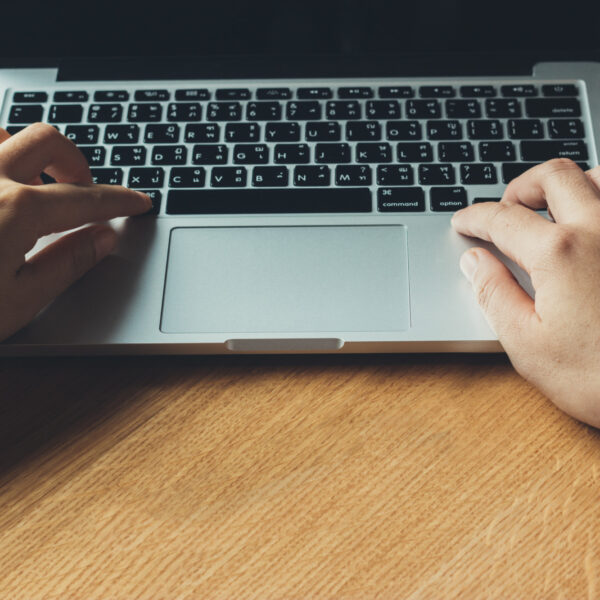