The Corporal is a watch from the rad company called Nixon, who make a whole bunch of great products including watches, headphones and bags. Here, I discuss my thoughts on The Corporal, from aesthetics to functionality and everything in between.

The company started after they were frustrated about the quality of watches on the market which do the talking for you; and that is just what the Corporal does. It is water resistant to an amazing 100 meters, which makes it ideal for anything from surfing to sailing. This is a watch aimed at active individuals who live life to the fullest.

I have mixed feelings about the Corporal’s size; it is large (48mm, 1.889 inches) and because it is so large it looks somewhat misplaced on my relatively small wrist (6.5 inches). Furthermore, it has some overhang on the sides of my wrist, which is also because of my wrist size. On the other hand I really like how the large face means that the time is large and subsequently easier to read than it would be if it was smaller.

Impressively, the face isn’t made from weak, easily scratched glass as you may expect. Instead it is made from the stronger and scratch resistant hardened mineral crystal which is one of the best materials for the face to be made out of, second to only sapphire crystal. The hardened mineral crystal isn’t even exposed to get bumped or scraped thanks to a raised rim surrounding it.

The Corporal’s crown is very, very pretty, it has Nixon’s logo on it under a layer of enamel so it won’t scratch off under normal wear and tear. The colour that surrounds the logo under the enamel is the same colour as the watch’s dial which adds to the overall class of the watch. The Corporal’s has a 48mm wide custom stainless steel case in a matte gunmetal grey finish which feels very solidly built and looks good too. The Corporal is quite heavy as a result, though; it weighs in at 111g which is 0.244lbs. Although the watch weighs this much I wouldn’t say that it felt too heavy but you certainly notice that it is there. 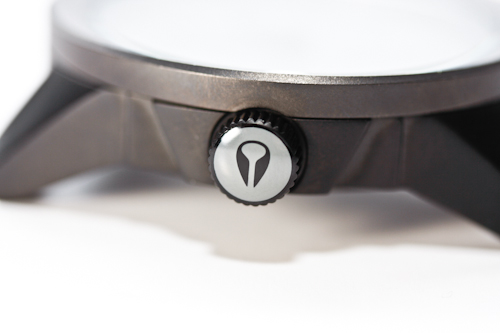 The dial on the Nixon Corporal is understated yet elegant which is unusual for such a large faced watch as in my experience the dials on large watches tend to rather overstated. The dial is fully marked including second markers and also the usual numbers; it is also attractively marked with ‘Nixon’ at the top. I am disappointed that neither the numbers or the hands are luminous which makes such a dark faced watch almost impossible to read in low light conditions although the Corporal is available with different colored dials which look as if they would be easier to read in low light conditions.

I dig the detail on the back of the Corporal, it details the brand name, the name of the watch, it’s water resistance and the movement all in a beautiful and crisp font. It’s just a shame that it is hidden behind the strap, but it is often the little details that you don’t see on a daily basis that make a great product what it is as with the interior of the Mac Pro; Well thought out and intuitive.

The Corporal’s strap is made from canvas and it has a genuine leather backing. It’s not only soft and comfortable to wear, the strap is also a very nice colour that is fitting with the military related name of the

watch. The buckle of the Corporal is gorgeous, it is made from custom stainless steel and is engraved with ‘Nixon’. 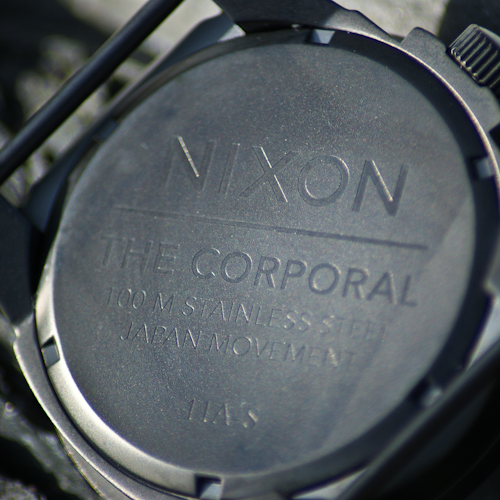 The Corporal’s movement is a 3 Hand Japanese Quartz MIYOTA movement, which is manufactured by Citizen. It is considered to be a well made and durable movement. I have been looking at the time on the Corporal pretty closely compared to the talking clock for a while, and I’ve worked out that it gains around 0.3 seconds a day which is fairly average for a midrange quartz watch.

The Corporal In The Wild

I’ve been wearing the Corporal during several hikes and trips to the beach; and it has performed well. From a comfort point of view I cannot fault it, the canvas and leather strap is soft, comfortable and hasn’t come loose; the strap also dries quickly and does not chafe. I have also got the watch wet with salty water and also got sand on it yet there are no scratches what so ever.

I love the Nixon Corporal, it is simple, elegant and awesome; and almost everyone I have asked thinks the same. You can pick up a Corporal of your own from the Nixon website here.

As an avid surfer from Cornwall, UK I’ve been looking for a waterproof watch that doesn’t look ugly for some time. my search is over, what a sexy watch.

I’m not keen on how large this watch looks when I me sure it up to my wrist, but I found another model that I just love and have just asked my parents for one for my 21st. They are insisting on getting me something special and I’ve found just that.

Dang – no luminosity. That’s a dealbreaker for me. Good thing there is Luminox. 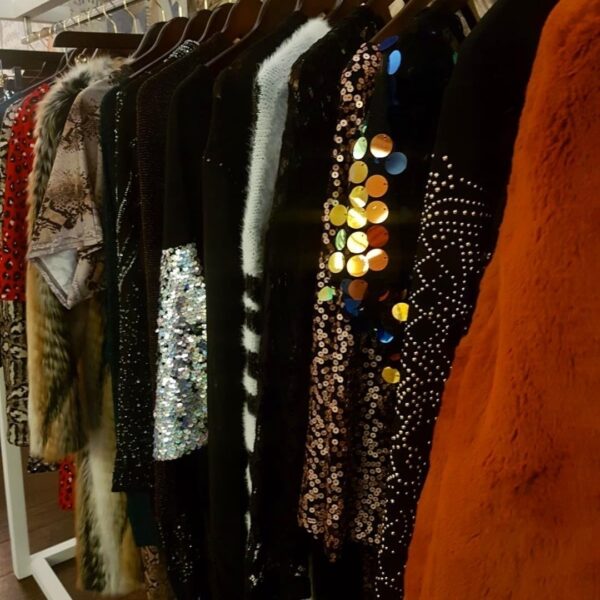 How to Dress for Your Work Christmas Party 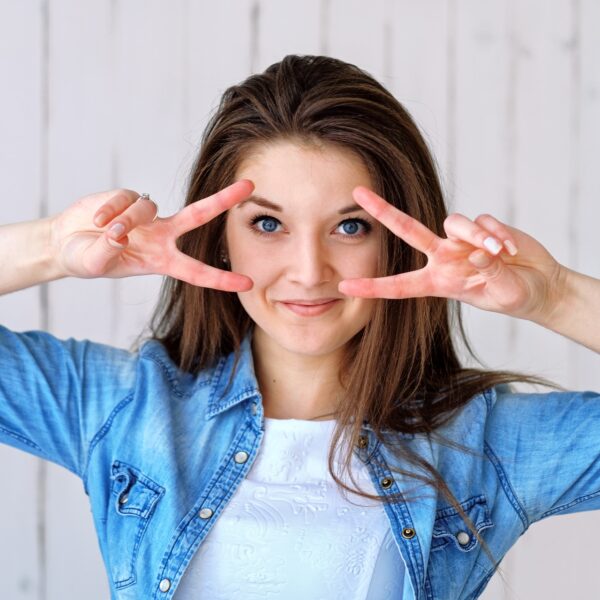 Be Cute and Comfy This Season With These Tips 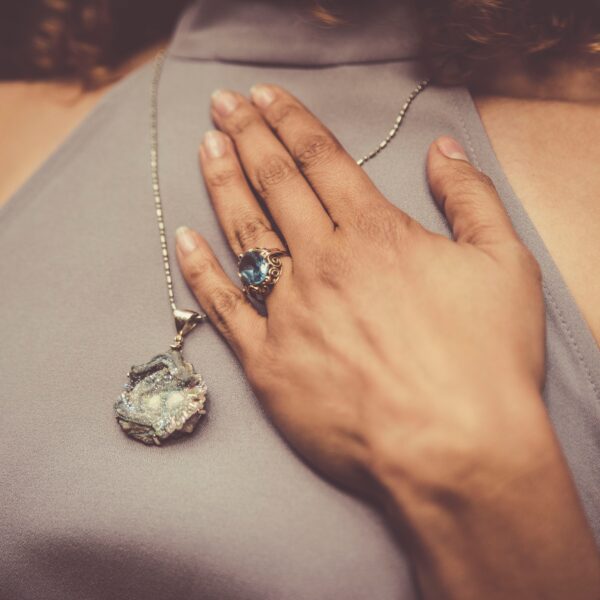 10 Jewelry Tips to Complement Any Look 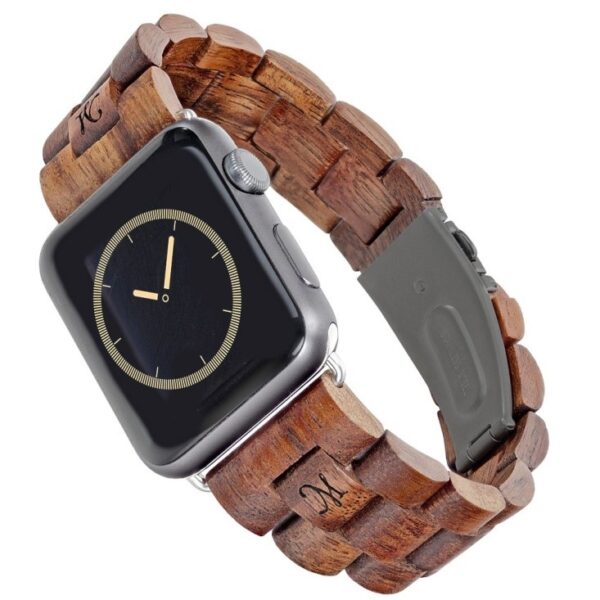