I recently bought the Dell ST2240T touch screen monitor after having seen how well touchscreens were working for Hammy in his studio and for other users on Gearslutz, I just had to get in on this. In the past I had tried using my iPad Mini with a VNC application on my Mac Pro, but I just wasn’t happy with the input latency and how some things weren’t possible to achieve, that and I wanted to use my iPad Mini as something more than just a touch screen for my Mac Pro, I also wasn’t impressed with the HUI and MCU protocol control surfaces I had used and their integration with Studio One Professional.

Mac OS X isn’t made for touchscreens out of the box unlike Microsoft’s surprisingly great Windows 8.1 Pro Update, this is a huge pity considering that Apple’s Macs quickly became the go-to computer for creative types and even more so over the past few years. Whilst the future of computers is seemingly with Microsoft since the passing of Steve Jobs due to complete lockups and not receiving mail consistently in OS X Mavericks, there’s a lot of people out there who are heavily invested into Apple’s ecosystem and can’t migrate back over to Windows just yet for professional use.

Mac OS X lacks a touch interface driver library and the UI generally isn’t meant for touch screens, so this is when I asked Hammy how he got his touch screens working in Mac OS X, he recommended Touch-Base’s UPDD (Universal Pointer Device Driver) as being low in resource consumption, slick to use and how you would expect it to function if Apple ever pulled their finger out and added what should have been in Mac OS X for absolutely years.

Installing Touch-Base UPDD on my Mac Pro running Mac OS X Mavericks wasn’t any different than installing any other DMG; simply clicking and choosing to install the application, hey presto, it’s that simple.

Once UPDD is installed you can begin to configure the touch screen to however you want it to be or how you may have grown accustomed to in terms of gestures using your Mac’s Magic Mouse or Magic Trackpad. 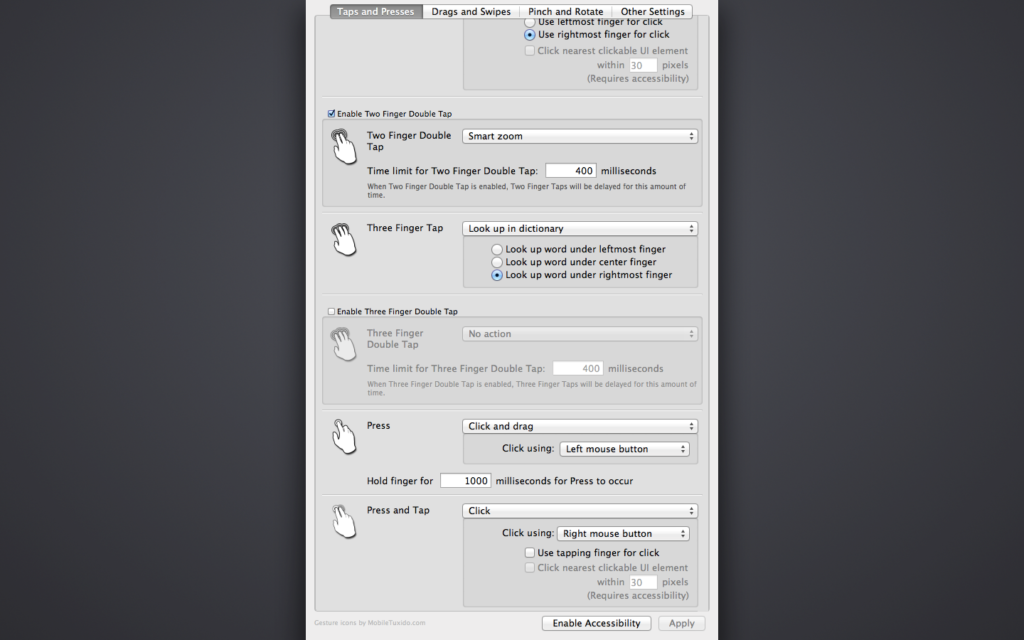 I was really taken aback by just how comprehensive Touch-Base’s UPDD is with gestures, I honestly wasn’t expecting to be able to use all of the gestures I had grown to love with OS X.

From press and tap, two finger taps, three finger swipes, the lot! Even pinch and rotate, which is awesome for CAD work. The multitouch support is as if Apple themselves had made it; Touch-Base UPDD is one seriously amazing piece of software. The overall setup procedure took twenty minutes as I’m very indecisive, though it will no doubt take anywhere between thirty seconds to a couple of minutes if you’re more decisive, unlike me, either way it was a walk in the park and I really explored all the different options available to me, I especially like the ability to configure how long a finger hold should be for it to register, this is the sort of thing that I would like to see made available on other devices such as the iPhone and iPad.

Calibrating the display is also something which needs to be done but takes no time, it’s literally clicking plus signs to show Touch-Base UPDD where the borders are so it can work effectively, once this is done, you can also adjust the speed of the cursor via the application in Utilities.

One of the more interesting features of Touch-Base UPDD that I’m going to be looking into in the next few months is the ability to connect unlimited hardware to one machine, this means I could have multiple touch screens with different banks of faders on them or even dedicate one to some of my favourite plugins. 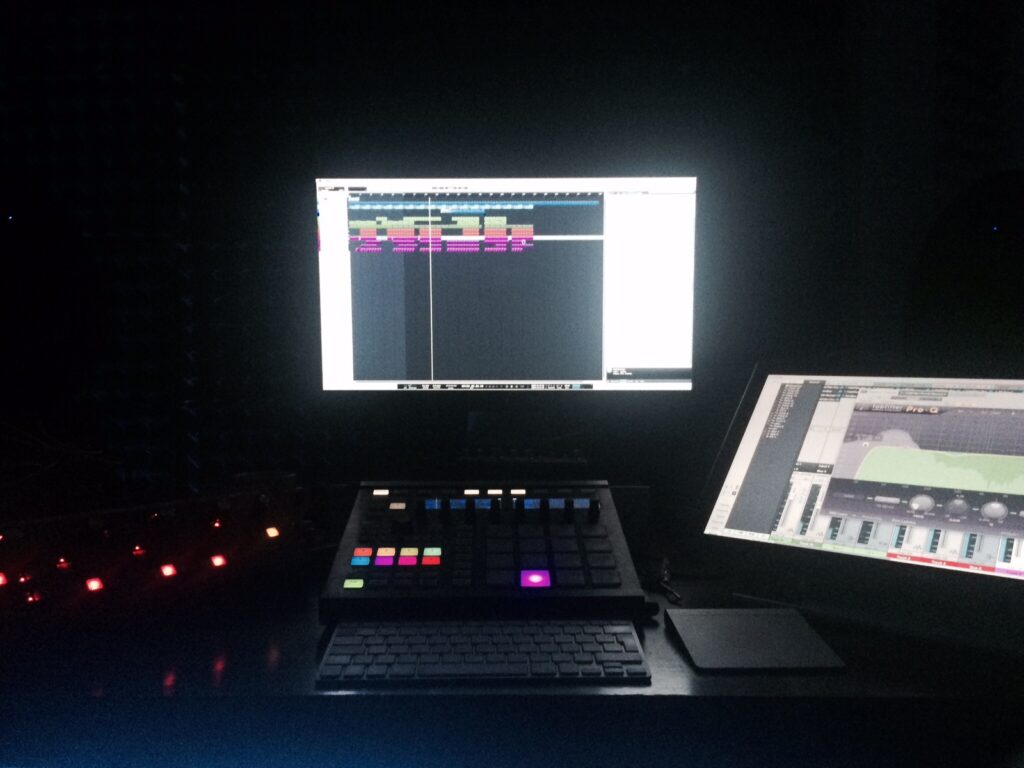 I am actually very surprised with how responsive the Dell ST2240T is, using a touch screen has breathed so much life into my music production; using a touch screen display makes moving faders so much easier and makes EQs and filters such a joy to use, the DAW is literally at my fingertips and my music sounds so much more organic as a result of it. I’m seriously impressed with how much it has changed my studio workflow. It did take a little getting used to as I have never really used a touch screen apart from my iPhone or iPad. Once you bring it into your workflow then you you will wonder how you did without it. I find myself going into the studios of friends and trying to operate their studio computer by pressing their screen and they give me a look that says I’m crazy! As you can tell by the YouTube video of me using Touch-Base UPDD on the Dell ST2240T, it’s a really professional grade experience. Special thanks to fellow writer and producer Bryan for creating the outro for the first Previous Magazine YouTube video too!

Although I was one of these people who worried about things like “gorilla arm”, this has never been an issue for me as the Dell ST2240T and many other touchscreens allow you to set them at an angle parallel to your main display in front of your keyboard. I’ve had no stability issues under Mavericks with UPDD and UPDD has never caused me any issues, it has literally been set and forget, this is how more software should be. If you want to give Touch-Base’s UPDD a try with your own software and hardware then there is an evaluation version available to download that allows you to use a hundred mouse clicks.

There are two different licenses for Touch-Base UPDD available:

The license for the ST2240T on Mac OS X costs £95 (That’s $171 or €133), and it is worth every penny. If you work in an office or have multiple workstations then the licensing works on a moving scale with the more you buy at once, the cheaper they become, this is really great for corporate use. £95 may seem like a lot of money for drivers, but you’re getting so much more than just drivers, you’re getting a natural extension and massive improvement to your workflow.

Aside from touch screens, Touch-Base’s UPDD also supports whiteboards, digitisers, mice, UMPC, light pens, tablet computers, interactive signage, and specialised pointer device controllers, and given the large range of platform and device support, this is something that will get hardware you thought you’d never be able to use up in full working order on your system.

Touch-Base’s support has been superb throughout the pre-sales and after-sales process, they’re very friendly and based in Southern England, as are their developers, it is great to see more software coming out of the UK again. If you have any questions before buying or even after buying then the employees at Touch-Base are very knowledgeable and can provide you with an answer.

If you’re spending a lot of time sat in front of your Mac making music or just doing a lot of everyday menial tasks then you can’t go wrong with augmenting your current production setup with a high quality touchscreen now that they’ve come down to just a couple hundred pounds, and now with the Touch-Base UPDD there’s no reason why you shouldn’t use one with your Mac, this is something that clients are and other artists are soon going to expect as being a part of a standard studio setup, be it an ultrabook with a touchscreen or a full display, they’ll expect touchscreens on some level.

Using it for over four years now and I can’t believe it, but it’s true. Since day one I did had almost every day issues with that program. But I was very patient. Most issues I had were that the touchscreen monitors won’t be recognized or that the press gesture appeared at a wrong calibration point. I don’t know why, but these developers didn’t managed to get it fixed within four years now – I wrote them about my issues but nothing solved it all … all issues returned (as I meant above) just the next day. It’s great to see newcomers trying innovative stuff and so BUT i really suggest to better wait until the BIG one’s will finally jump on the bandwagon and will take care of our “touchscreeny dreams” here … UPDD is simply not worth it yet! Nice try but nothing than a pain in the …

Would you consider selling your license?

I can’t say it surprises me when you’re using a sub-par Hackintosh to begin with. I recommend getting the real thing, or using Windows.

Some one said that due to its mix mode of kernel space and user space drive. In some heavy web site like facebook, updd gesture really lag, compare to trackpad or Ipad remote

Some one said that due to its mix mode of kernel space and user space drive. In some heavy web site like facebook, updd gesture really lag, compare to trackpad or Ipad remote 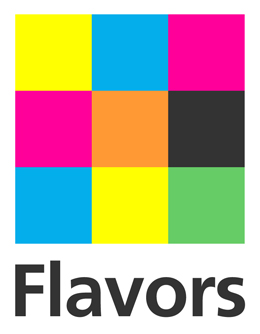 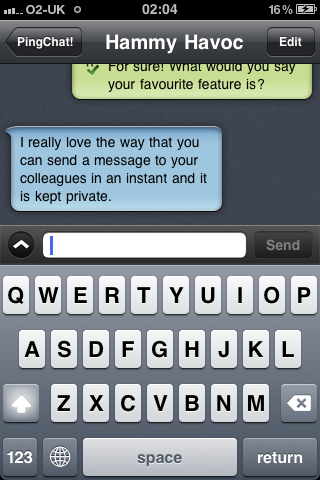 PingChat!: The Fast And Easy Way To Chat 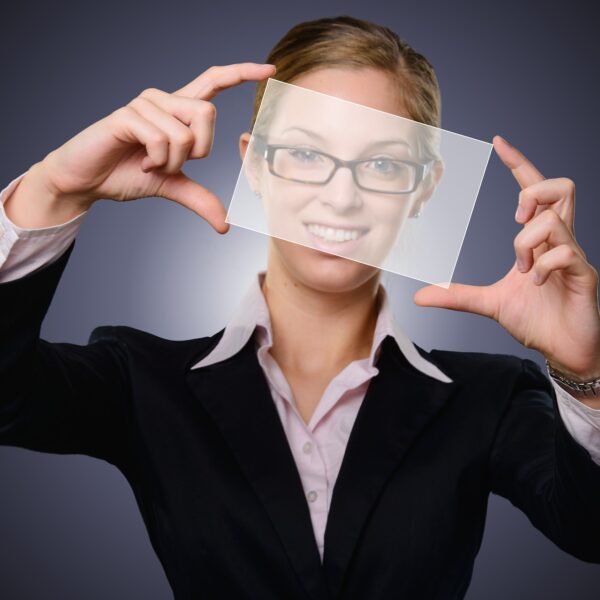 CRM Information Technology and the Future of your Business

What is File Replication and its Advantages?